In the aftermath of the events in Foundation's Edge, Councilman Golan Trevize, now staying in the planet Gaia, wants to explore the reasoning behind his decision to allow the formation of Galaxia at the end of that book, which he had made instinctively. Using his ship, he intends to explore the galaxy, and thinks that the answer may lie in humanity's ancestral planet -- Earth. Both historian Janov Pelorat and Gaian Bliss, who are now romantically involved, volunteer to join him in his self-assigned mission.

The group's first stop is the planet Comporellon, which, according to Janov, has one of the oldest histories in the Galaxy, possibly having been settled from Earth itself. Arriving there, though, they find themselves at risk of losing their ship, the Far Star, when the Foundation requests its return and Comporellon's government (which is part of the Foundation, but only loosely) wants to reverse-engineer it to apply the Far Star's cutting-edge features to make Comporellon's navy capable of defending itself from the Foundation. However, while Janov manages to find the coordinates to three planets that are said to have been settled even before Comporellon was, Golan manages to seduce a member of Comporellon's government, which allows them to escape.

Using Janov's coordinates, the trio travels first to the planet Aurora, which has suffered a marked change from the times of the Spacers: civilization has collapsed and nature has taken over the Spacer cities. Golan first, and then Janov and Bliss, find themselves treed by a pack of wild dogs, but they manage to scare them off between Golan's blaster and Bliss' mental powers. Realizing they won't find anything useful in Aurora, the group decides to leave.

The next planet in their list is Solaria. Upon landing, they find it pretty much abandoned, until a group of robots finds them. Before action can happen, they are found by the owner of the place they have landed in, Sarton Bander, who takes them to his home. There, he explains how his people have genetically engineered themselves to be self-reproducing hermaphrodites, thus fulfilling their wish to not require any social interaction that is not personal, and also giving themselves "transducers", organs capable of manipulating energy, and which they use to power their robots. Bander attempts to kill them so they cannot leave and tell everyone about them, but Bliss manages to stop him - only to kill him when she accidentally prevents him from transmitting energy instead of absorbing energy. When they run away, they encounter Fallon, Bander's physically immature child, whom they take with them at Bliss' insistence before she is killed by Solarian robots.

The last coordinates guide them to Melpomenia, which has suffered a catastrophe that destroyed their atmosphere, leaving it at a few thousands of normal atmospheric pressure. Golan and Janov set out in space suits and end up finding a library that contains a monument to the fifty Spacer worlds, with their names and coordinates. Trouble nearly ensues when they find a local moss has started to grow around the seals of their space suits, and they surmise the moss is feeding on minuscule carbon dioxide leakages, but they manage to eradicate the moss from their suits, lest they risk taking it to another planet. Using the coordinates and the ship's advanced computer, Golan manages to draw a rough sphere whose center points to two potential sources, a binary system and a one-star system: gathering that they need to find information before approaching Earth, which they know must be in the one-star system, the group chooses to go to the binary system.

The binary system turns out to be Alpha Centauri, whose only inhabitable planet is an ocean planet with only a large island standing above the sea level. The locals, the Alphans, welcome the group happily and invite them to join in their festivities, where Fallon woos them with her transducer ability, using it to play a flute without touching it. That night, however, an Alphan woman who has formed an attraction to Golan tells them they must leave: their contact with the locals has infected them with a microbiological agent the Alphans are immune to, and which the elders will activate it as soon as the fishing expedition returns so they won't be able to spread news of their existence. The group escapes in the middle of the night, and sets out for the closest solar system.

Janov excitedly notes that the planets they are finding coincide with the known facts about Earth, but when they reach the third planet, they find a shocking view: Earth is highly radioactive, and unable to support any kind of life.

Before they try to leave, though, Fallom takes control of the computer and tries to find Solaria, an action that calls Golan's attention to the Moon, which is large enough to hide any forces that may have escaped Earth. Managing to find an entrance to a hangar, they eventually encounter R. Daneel Olivaw, who has been guiding humanity since the time he and R. Giskard Reventlov developed the Zeroth Law of Robotics. He was behind the settlement of Alpha Centauri, the creation of Gaia and the development of psychohistory, and was also behind Golan making his choice at the end of Foundation's Edge (although not the decision itself. Daneel also reveals another reason why he got them to come: he is dying.

As it turns out, his positronic brain is currently deteriorating, a process that has already happened more than once, but now he finds himself with the trouble that, with so many experiences in his life, he would need a more advanced brain he is unable to design, and which would nonetheless last an even shorter time. He needs to merge with Fallon to gain the advantage of her human brain, which should allow him time to oversee Galaxia's creation.

In the end, Golan confirms that his choice of Galaxia over the Foundations was the correct one: as he points out, psychohistory is only capable of determining the development of human society. Should humanity encounter an alien society - one from another galaxy - psychohistory would most certainly not apply to them, and the Foundations could find themselves in trouble even greater than the one the Mule caused. However, with Galaxia's ability, humanity would be able to fight them off.

Daneel continues to explain that since the dawn of civilization, man has been divided. This was the reason for his causing the creation of Psychohistory and Gaia. The book ending tells us:

"In all human history, no other intelligence has impinged on us, to our knowledge. This need only continue a few more centuries, perhaps a little more than one ten thousandth of the time civilization has already existed, and we will be safe. After all," and here Trevize felt a sudden twinge of trouble, which he forced himself to disregard, "it is not as though we had the enemy already here among us."

And he did not look down to meet the brooding eyes of Fallom - hermaphroditic, transductive, different - as they rested unfathomably, on him. 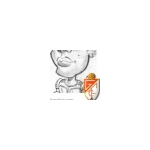