Dr. Isaac Asimov (2 January 1920 – 6 April 1992) was a Russian-born American Jewish author and biochemist, a highly successful and exceptionally prolific writer best known for his works of science fiction and for his many non-fiction books, including several genres: popular science writings, guides to the bible and science, mystery novels, literature commentary (his works on Shakespeare) and history.

Asimov was by general consensus a master of the science-fiction genre and, along with Robert A. Heinlein and Arthur C. Clarke, was considered to be one of the "Big Three" science-fiction writers during his lifetime. His most famous novels are those based in the Foundation Universe including the Robot, Empire, and Foundation series.

Asimov was one of the most prolific writers of all time, having written or edited more than 500 books and an estimated 9,000 letters and postcards. His works have been published in nine of the ten major categories of the Dewey Decimal System (all except the 100s, Philosophy)

He was born in Petrovichi, Russia, but his family migrated to the USA when he was three years old. He graduated from Columbia University in 1939 and took a Ph.D. in chemistry there in 1948. In between, he spent three years during World War II working at the Philadelphia Navy Yard's Naval Air Experimental Station. After the war ended, he was drafted into the U.S. Army, serving for just under nine months before receiving a honorable discharge.

His physical dexterity was very poor. He never learned how to swim or ride a bicycle, although he did learn to drive a car and found he enjoyed it. He did not learn to operate a car until after he moved to Boston, Massachusetts. In his jokebook Asimov Laughs Again, he describes Boston driving as "anarchy on wheels".

He started writing for science fiction magazines like Astounding. John W. Campbell, then editor of Astounding Science Fiction, was a strong formative influence and eventually became a personal friend. He published in 1950 under Doubleday his first novel, Pebble in the Sky. He wrote a collection of robot stories called I, Robot on the genre of Robot series. He then later wrote his Foundation series.

In 1941, "Nightfall" was a famous short story which has been described as one of "the most famous science-fiction stories of all time". Another short tale that has been very famous and probably one of the author's favorites (he said so when asked about it) is "The Last Question". It is about the fight against entropy. Every good amount of years a question is performed about stopping entropy. The question is posed to the best computer in each epoch.

He also write juvenile stories on his Lucky Starr series.

From 1985 until his death in 1992, he was president of the American Humanist Association. 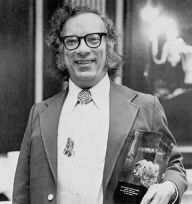 He won a Nebula Award in 1973 for Best Novel for The Gods Themselves. He also won six Hugo Awards for several novels.

He died in 1992. His wife has published some tales about Norby, a fictional robot created by him.

Although Jewish born, he was not a practitioner. He was a rationalist and had a skeptic world view that is reflected in his science articles. He opposed the law to revive Creationism in schools in the Reagan era.

He was claustrophile, this is, he liked small spaces. He was also afraid of flying and did not think it was contradictory with his characters flying spaceships. That was his characters, not him, and it was fiction, according to some of his answers to this question.

Authors inspired by him

Besides movies, his Foundation and Robot stories have inspired other derivative works of science fiction literature, many by well-known and established authors such as Roger MacBride Allen, Greg Bear, Gregory Benford and David Brin. These appear to have been done with the blessing, and often at the request of, Asimov's widow Janet Asimov.

It is a fictional science created in the Foundation series. It was invented by Hari Seldon, a scientist. It is a science of future behavior of large masses of people. People can be treated like the molecules of a gas: they are millions but the gas itself (humanity) can be treated as a unit. This science worked over several million people (the human population of the galaxy in the times of the Foundation) and predicted the behavior of humanity as a whole.

Seldon predicted the fall of the Galactic Empire which was governing the galaxy at that time. He predicted there would be 25000 years of darkness, but he could shrink it to 1000 if some minor changes could be performed. For that, he created a "Foundation" of encyclopedists in a far planet. The Encyclopedia was a trick to fool the Emperor. The real plans of the Foundation were to advance scientifically and to get and create weapons so they would become invincible. This Foundation would later attack the Empire, emerging as the conquerors and would try to revive the lost empire. He created also a "Second Foundation" which would have mental powers. The first Foundation would know nothing about the second, for his plans to be accomplished successfully. He then located the Second Foundation on "the opposite side of the galaxy" with respect to the former.

Nevertheless, Seldon could never predict the destiny of individuals with his science. So he could not predict the rise of a new human being, a mutant called "The Mule" who had mental powers and could manipulate the emotions of others.

That is the universe of the Foundation series, or Trantor universe as it is called, honoring the name of the planet where the Foundation is. Asimov himself confessed that this Galactic Empire was inspired by the historical Roman Empire. So, the thousand of years of darkness was the era called The Dark Ages. There are some characters directly inspirited by the Roman Empire, like the General Bel Riose who is thought to be inspired by Flavius Belisarius, the last great general of the Roman Empire during the 6th century.

Another common theme on his writings was robots. They were humanoid robots like R. Daneel Olivaw who acted like a person, except for feelings. They were pictured like soft, nice and servants of humanity. They could not harm people, like they do in other science fiction writings or movies. There was another character, besides R. Daneel Olivaw: R. Giskard, which had mental powers. Susan Calvin was a robotist who appears on many robot stories. And Elijah Bailey was a detective who solved mysteries with the help of R. Daneel. In scientific writings he also imagined that they could replace humanity.

There was a very advanced computer: Multivac, which means Multiple Vacuum Analog Computer. It was huge and has tremendous processing power. It was used in several experiments and short stories.

He predicted many inventions, like the personal computer. He went beyond that and on the story What If he describes a TV-like screen with data, much like today's laptop computers. He wrote about miniaturization on The Last Question on the time of vacuum valve computers.

The Three Laws of Robotics

In most of his stories about robots, the robots are supposed to follow these laws, which were first explicitly stated in the 1942 story Runaround. Usually the plots are based on dilemmas arisen by the clash of two of the laws or the different possible interpretations of them. Many of these stories are collected in I, Robot. Like most of his short stories he published them during the 40s and 50s (the Golden Age mentioned above) in pulp magazines.

According to Schott's Original Miscellany,

"Asimov later felt that his initial three laws were insufficient to protect society at large. Consequently, in his 1985 book Robots and Empire, he created a prequel, 'Zeroth' law, to which the other laws were subordinate."
—Ben Schott

This law, basic a wider reaching variant of the first law, stated that a robot may not injure humanity or, through inaction, allow humanity to come to harm. [1]