Nemesis, written in 1989, is a stand-alone science-fiction novel written by Isaac Asimov.

Interestingly, the book is written in two threads: one occupying the 'present' and the other the 'past'. Both threads are set in the 23rd century.

Humanity has settled part of the Solar System through movable space stations called "Settlements". One such Settlement, Rotor, is successfully able to use "hyperassistance".

A scientist aboard Rotor named Eugenia Insignia and the commissioner of Rotor both realize that Earth's future is in considerable danger. A star called Nemesis is traveling through the Milky Way and will enter the Solar System in 5000 years, altering Earth's orbit to the point that it will become inhabitable. For varying reasons, the commissioner decides to move Rotor to Nemesis. There they find an enormous gas giant they term Megas. One of its moons is an Earth-sized satellite with an atmosphere and oceans of water -- but no intelligent life detectable beyond the prokaryote stage, or simple one-celled life without a nucleus. The first thread of the story -- set in the 'present' -- is about Rotor.

Back on Earth, Eugenia has left behind a husband who wants to be reunited with she and their daughter Marlene. Earth's scientists realize the danger Nemesis poses, and begin a program to realize hyperspace travel. The reader will note that this is different from the derivation of hyperspace in the Foundation metaseries, as revealed in stories like The Little Lost Robot. Their plans will come into fruition when the Superluminal is built. This is thread "2", set in the past, and as the book wears on thread 2 will catch up with and its story will catch up with thread one.

One of the main characters is the daughter of Eugenia -- and her name is Marlene. Marlene exhibits the ability to read body language and determine what they may be thinking or feeling. Marlene feels strangely drawn to the planet, and eventually helps Rotor realize that the mass of prokaryotic biomatter occupying the planet is not simple life, but rather constitutes a single planet-wide conscious lifeform. This is similar to Asimov's treatment of Gaia. 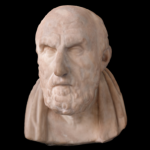