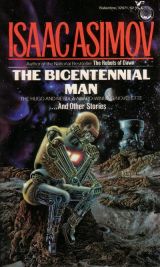 NDR is an humanoid robot created by U.S Robots and Mechanical Men. It is acquired by a rich family. It posseses a positronic brain. They change its name to the more familiar Andrew. Andrew takes care of the two daughters and one in particular loves him too much. The robot calls her Little Miss. Andrew starts to make art and it gives a doll to her. The robot starts taking conscience and wants more freedom. It gets a bank account which his owner helps it to acquire. Andrew wants to have some rights.

The owner of the robot dies. The robot cannot cry but it feels very sad about it. Little Miss grows to adulthood and helps the robot to gain its rights. The robot goes to mechanical men to acquire some upgrades by they had discontinued the project. It then goes to an amateur roboticist and he makes him an upgrade to look like a real man. Now, we can name the robot as "he".

Andrew meets there a female robot which he was searching. He disappoints because she is totally artificial. As Little Miss dies, he is very depressed about it. He later decides to end his life. He goes to the robotist again and tells him to change his brain in a way that it can die like a human being. He also gains a more "human mind". He is considered human, at last, by people and he dies at 200 years of age, honouring the name of the novel.

A movie by the same name based on this novelette was released in 1999 starring Robin Williams.

Retrieved from "https://asimov.fandom.com/wiki/The_Bicentennial_Man?oldid=5855"
Community content is available under CC-BY-SA unless otherwise noted.

Fandom may earn an affiliate commission on sales made from links on this page.

Fandom may earn an affiliate commission on sales made from links on this page.